Skip to content
Health, Ethics and, Law / All Events / Guest Lecture on ‘Emerging Infectious Diseases and the Impact of Behavior on Amplification and Spread of Diseases during Outbreaks’ by Dr Richard Cash 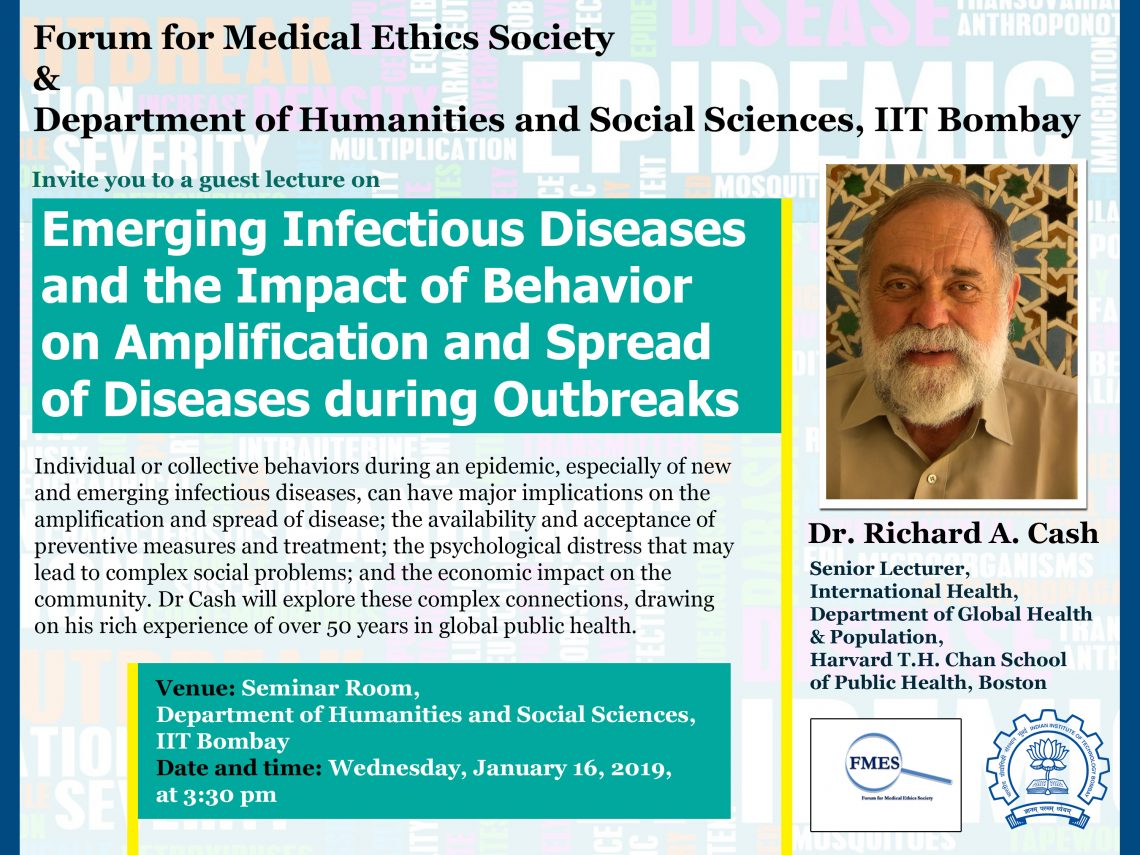 “The control of infectious Disease outbreaks requires knowing about the organism, but involvement of anthropology, social and political science is essential to understand spread of the disease”.

Dr Richard Cash concluded his talk with this final thought which appropriately describes the impact of human behavior on spread of infectious disease. The third grand round was held on Wednesday, January 16, 2019 at the Department of Humanities and Social Sciences, Indian Institute of Technology, Mumbai on the topic ‘Emerging Infectious Diseases and the Impact of Behavior on Amplification and the Spread of Diseases during Outbreaks’. The lecture was organized by the Forum for Medical Ethics Society (FMES) in collaboration with Department of Humanities and Social Sciences, IIT, Bombay. The lecture was delivered by Dr Richard Cash, a senior Lecturer, International Health, Department of Global Health and Population, Harvard T.H. Chan School of Public Health, Boston, US who specializes in infectious diseases and research ethics.

In his lecture, Dr Richard Cash discussed how individual or collective behaviors during an epidemic, especially of new and emerging infectious diseases, can have major implications on the amplification and the spread of disease; the availability and acceptance of preventive measures and treatment; the psychological distress that may lead to complex social problems; and the economic impact on the community. He elaborated this phenomenon with the examples of HIV/AIDS, Nipah, Ebola, Zika, influenza, and drug resistant bacteria. Customs/beliefs such as faith based healing, funeral and burial practices, and the stigmatization of the patients, survivors, and health care professionals affected outcomes during the 2014 Ebola outbreak in West Africa. In India, responses to recent outbreaks of Nipah, Zika, and leptospirosis (post flood in Kerala) are contemporary examples. These responses and other outbreaks across the world should be examined not just from the basic epidemiologic characteristics of the pathogen but also the behavioral changes they evoke.

Some significant thoughts and questions about caste based discrimination and open defecation, priority setting during outbreaks, efficient public health system and role of funding organizations in deciding priorities were raised by the audience. Responding to these questions, Dr. Richard Cash gave examples of open defecation practices and stigmatization of menstruating women in India to reemphasize his argument about how religious and cultural values have major impact on the individual behaviors. Very often, there is enthusiastic response from the government when there is some kind of disease outbreak. The public policies conveniently avoid strengthening of the public health system to avoid infectious disease outbreaks at first place. The sickening, ill-equipped health system and deficient human resource in terms of epidemiologists and social scientists in India is very much responsible for the spread of the outbreaks. The priorities in low and middle income countries have been set upped by giant funding organizations by investing more on technological solutions to the health problems in these countries. For example, in North East India, though Malaria related deaths are occurred very often, more funds are dedicated to HIV treatment. The public health researchers are also vulnerable to priorities set upped by funding organizations. The developing countries like India should not allow the external organizations to set up their priorities.

“We have met the enemy and he is us”